Have you ever wondered what happens to a TRINITY yacht after its birth on the Gulf Coast? Are you curious about the eventual home of those sleek hulls, polished to perfection with chrome gleaming in the sunlight?

It turns out many of them have left us for the high-life of the Adriatic’s crystal clear waters, dotted with ancient cities on small rocky islands and the new summer homes of the rich and famous. And me, of course. Not too long ago, my husband and I were in Croatia to join European friends on a sailing trip aboard a forty-foot catamaran, a mere baby alongside the mega-yachts plying the Dalmatian waters. 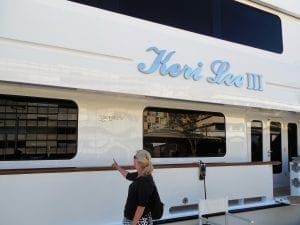 Imagine my surprise when I spotted the logo TRINITY on yachts docked alongside the stone wall of the port city of Split, a few hundred feet from where I exited the massive underground layout of Diocletian’s Palace. The palace in Split’s current Old City is so authentic that the Game of Thrones was filmed there for one season. But on this day, it was the yachts that turned my head. I walked like a Naval architect along the stone bulkhead, inspecting each one.

The first TRINITY yacht I encountered was very traditional – the MK Keri Lee III. Stretching an impressive 177 feet long, I learned that it’s available for charter for somewhere around 245,000 euros a week, plus all expenses for a ten-person crew (it is a good thing the Euro is weak.)  For that paltry sum of money, the MK Keri Lee III will carry you and eleven of your closest friends wherever your heart desires.

As long and pretty as the MK Keri Lee III and other yachts were, it was TRINITY Yachts’ 141-foot WAKU that sent me swooning with its sleek, deep navy blue hull and back-lit name. It was the coolest vessel in the harbor. Built in 2009, its website says it is now owned by someone or something in Montenegro, a small country south of Croatia, and the setting for the Bond movie Casino Royale. I longed to know more about the yacht. So for a while, I loitered about its gang-plank, hoping to find its owners or occupants – at least until a sudden bura, a strong storm coming over the mountains, appeared and forced me to leave my post.

The next time I noticed the WAKU we were snug in the scenic harbor of Trogir, a UNESCO-protected city, along with an almost endless number of eighty-foot sailing boats and spectacular yachts. It was the Miami Boat Show on steroids and an altogether new experience for me. That night in Trogir was a blur with sailing stories, Croatian wine, fine food, and jet lag. Soft lights glistened on the polished stone pathways where puddles of rainwater still stood, adding to the hazy feel of the evening.

By the time we walked back over the old city bridge to our catamaran and past the WAKU with its stern to the dock wall and its name in lights, I was too full, tired, and content to pay much attention to anyone aboard. That would soon change. Incredibly, we were apparently on the same course as the WAKU. We saw it in our small cove of deep clear water on the island of Vis the next night, and for the next six days we settled into a comfortable pattern of cat and mouse from one incredible island to another – never in a hurry but always just a bit ahead or behind each other, and most of the time within sight. 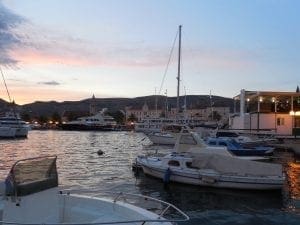 Many nights we were in picturesque lagoons where our catamaran would tie to the dock and we ate local seafood, including octopus, sea urchins, and squid, while the yachts – including WAKU – were discretely moored just far enough away to make occupants undetectable as they were fed gourmet food prepared by personal chefs.

I have to admit that I tried to find out the identity of the occupants. I tried hard. Any movement of WAKU’s matching navy blue thirty-five-foot tender was enough to cause me to jump from my lounging position and pull out the binoculars. It was crazy, or perhaps I was. Although I knew they had to leave the yacht and swim at some point, or at least look at the water, I never could discern a single human being other than crew members.

One night when we had coffee with the Captain of another yacht – it was well over 200 feet long and had a matching silver helicopter on the top deck – I implored our Captain to find out more information about the people on our neighboring yachts. I was sure that the WAKU’s passengers had been dropped off at a secluded villa at the end of the cove. Our Captain, a former boxer and member of the Croatian army, was horrified I would ask such a thing and refused to help. He said there is some code of conduct with captains forcing them to keep everything secret. I think it is more likely an employment contract, but I eventually gave up the argument.

The only night where our paths really separated from the WAKU – men from boys, yachts from pretenders, the rich and famous, and the rest of us – was in Hvar. Hvar is the new “IT” city – the most famous of the island destinations and with good cause. Old churches and buildings line a large town center and small stone alleys lead visitors up the hillside to an imposing fortress on top through a maze of five-star restaurants and high-end shops. The nightlife is so intense that after the bars close, the guests are ferried to another island in order to party until dawn. Only yachts were moored on the marble dock at Hvar with their names in lights and the gang-planks lifted high to avoid a stray curiosity seeker like me from climbing aboard. The WAKU was now with its yachting peers – fender to fender. Sadly, when we arrived the gang-plank had already been lifted and the boat’s occupants departed. Even worse, we had to leave Hvar before they returned.

Unlike WAKU, in Hvar, our boat was in the main marina far across the water and where city lights were replaced by deep dark foliage. There was no partying for us. We had to stay sharp in order to make it back. After our pizza and a walk about town, we dutifully boarded a small ferry carrying about twenty passengers in a ten-passenger space. The rolling seas and the pitch-dark night, illuminated only with the lights of the spooky edifice atop the city, were quite ominous.

At that moment, I decided I wanted to be on the WAKU and not on a twenty-foot boat, most likely with insufficient life vests. Why not caviar instead of pizza? Really, how expensive could the WAKU be? Well, it turns out to be a lot. I checked the internet and although the WAKU is on the market, the price tag of $19.5 Million is a bit above my pay grade. I could see my bank officer smirking as I asked for the loan.

Eventually our week onboard the catamaran ended without me knowing whether the WAKU was the yacht with Reese Witherspoon or Angelina Jolie and Brad Pritt or some other celebrity in Croatia at the time. Still, it was not the end of the WAKU. Several days after being ashore and right before we left, my husband and I were in Šibenik drinking a glass of wine at a café, watching boats as the sunset over the harbor. I smiled as I caught a glimpse of the unmistakable navy blue WAKU leaving the harbor. Šibenik is a stunning area north of Split where you can swim at the bottom of the famous Krka mountain waterfalls in the morning, and laze on the seaside beach under castle walls in the afternoon. It made sense the WAKU would visit the city of Šibenik, but although we had been wandering the historic town for two days I never saw the yacht arrive nor moor in the harbor – its stealth movements always as guarded as a submarine. Reluctantly, I snapped one last picture and toasted it my final goodbye as its stern slipped between two small islands – its phantom crew and passengers eluding me for the last time.

Just as the WAKU enchanted and intrigued me on the first day in Split, it did again on the last day in Šibenik. It was with a sense of pride that I realized the WAKU had emerged from its humble beginnings in the Gulf of Mexico into a grand yacht cruising the islands of the Adriatic Sea.

This site uses Akismet to reduce spam. Learn how your comment data is processed.

You can find out more about which cookies we are using or switch them off in settings.

This website uses cookies so that we can provide you with the best user experience possible. Cookie information is stored in your browser and performs functions such as recognising you when you return to our website and helping our team to understand which sections of the website you find most interesting and useful.

Strictly Necessary Cookie should be enabled at all times so that we can save your preferences for cookie settings.

If you disable this cookie, we will not be able to save your preferences. This means that every time you visit this website you will need to enable or disable cookies again.

This website uses Google Analytics to collect anonymous information such as the number of visitors to the site, and the most popular pages.

Please enable Strictly Necessary Cookies first so that we can save your preferences!